There is understatement in almost everything British, and that may be because life’s storms are, indeed, best met by “Keep Calm and Carry On.” The Blitz, almost 15 years of war rationing, great economic and social change and now both the challenges of Brexit, and, more important the coronavirus, have demanded, demand again, a people’s resolve.

John Lyons of Hartlepool, off the North Sea, my grandfather, set such a tone. When we visited his town, attacked during the First World War by offshore Germans who could have included some of my other European relatives, there was residual reminder of the loss of lives more than 100 years ago now. A museum dedicated to that history stands by the rail line bound north to Scotland.

The British, especially the older lot, do not forget hardship, however stiff the upper lip. On certain Sundays in London, on war memorial days, you still see chaps with sport coats and suit jackets that have commendation medals affixed. These men, and women, proudly and with upright posture, stroll, whether in Lambeth Walk or elsewhere.

Endurance, survival are the unseen medals on those chests, and the civilians who lost kin and home in the Blitz and later V2 rocket attacks wear them too.

The British tradition of tea drinking also is a badge of courage and survival. Any tense moment has its cup of tea, and even a glance at the cozy or the kettle can lower the blood pressure.     My late mother, daughter of an Englishman and an Irish mom, all too soon an orphan at age 8 and with a tough life in the Great Depression, would not be without her tea in the proper Irish way, with a dash of milk (substituted by condensed, canned milk during the American war rations time).

In this long moment of the spreading coronavirus, with the sad passing of some and the hardships, each of us has a reference to those who came before and endured. It is at least comfort to think back and nod in respect and remember that others have stayed calm and carried on.

The life-sobering of young people today in this coronavirus world, already shaken to an unsteady footing by Sept. 11, other terrorism, endless military conflict and the hypocrisy shown by often ineffective, bumbling, special interest-driven leadership, is not without historical precedent.

The Holocaust, wartime Europe 1914-1918 and 1939-1945, many nations’ civil wars, dictatorships, plagues and today’s horrific conditions in parts of the Middle East, Africa and the Americas took and continue to steal childhood. That is the greatest sin of humankind, the willowing of the future as they lack nurturing. The world is supposed to be the mother.

Each generation, every young person, confronts obstacles, walls too high to climb, though with the progress and enlightenment that are also part of the world’s evolution, so many are matured to bring spectacular achievement, caring, kindness, giving and compassion.

And most young in war and crisis also exhibit unbelievable sacrifice.

In 1959, teenagers like myself, living comfortably, mostly in blue-collar families with parents who were thankful for employment after surviving the Great Depression and World War II, were presented with two films that began our sobering, albeit relatively mild compared to today.

We saw “The Diary of Anne Frank” and placed our hearts, minds and souls in that Dutch attic with a fellow teen. Our own family dynamics of siblings battling over what to watch on TV suddenly seemed so embarrassingly small compared to that in secret space, the Frank family and shopkeeper Kraler who hid them constantly worried that the Nazis would come.

Life played out, though, as did Anne’s destiny.

We also watched “On the Beach,” which portrayed Australians following a global nuclear war and the coming end of all life on earth.

Gone, suddenly, was our very limited exposure to the Cold War and the possibility of hydrogen bombs hitting America. We were never sobered by the school air-raid drills, even thankful to get out of class and put our bodies against the hall lockers instead of the earlier practice of hunkering under desks.

We emerged from the theater in silence, not joking as usual. The walk home with friends after “On the Beach” added a few years to our growing maturity. Yes, gaiety, a blessing for some youth, those in our circle anyway in our small, typical post-war U.S. village, would continue. There would be proms, graduations, further schooling, jobs, families, but newfound seriousness joined our being, infused within.

Today, it is not just two life-changing films. It is a pandemic, not seen since my the 1918 flu of my mother’s time, when she  lost siblings. This is as big a challenge to the world as universal war.

Our young will be overwhelmingly sobered, and the hope is that their natural optimism, vitality and strength will, after the cataclysm, rebuild society and the earth. They can, as adults, better prepare us for another viral assault. They can work against the numbness of inefficient national leadership. They can better empathize with and care for those who have less, who even in the best of times are poor and destitute. The greed can lessen, the hypocrisy reduced.

There can be a better world from the young who now are sobering.

In the very early hours of a Tuesday in Spring Valley, N.Y., my car rolled down Franklin Street past what was Eckerson’s blacksmith shop where during World War II my grandfather Art Sr. worked with other men to pack scrap paper and cardboard in one of millions of such home-based efforts throughout the United States. It was quiet volunteerism, not seeking praise, done almost in anonymity, rolling up sleeves to do what could be accomplished as battles raged in Europe and the Pacific.

For my grandfather, the scrap drive was also a way to support his son Winfield, soon to lose two fingers in the Huertgen Forest battles.

Near the smithy on Franklin was the Valley’s memorial board listing men and women in service. The family names there were repeated from the First World War, so small was the village and so little the change between conflicts.

Also on Franklin was a small, shingled house, No. 16, where about 8 years later, the war over, the scrap drive recalled in memory and fading photographs, my fourth-grade self was able to play games with Tring Butt, my friend. The scrap drive, the selfless service of civilians and military, made that possible.

Life picked up so quickly in peacetime, the old, realized fears of both a Second World War and the Great Depression proceeding it now pushed into the subconscious by post-war progress and optimism. The wonderful ordinariness of peacetime rapidly sang its song, once again proving the resilience of humankind.

We are now again “at war,” fighting the coronavirus, another chapter in the story of the world: super-major challenges, suffering, inevitable death. But also the heroics of so many, the selfless-giving, the quiet duty fulfilled.

When I drove down Franklin Street on March 17, itself a day of import for the great Irish and their knowing souls, I would arrive at a soup kitchen now 35 years old, held just two blocks away at the old Dutch Reformed Church, now Church of the Nazarene.

Volunteers in the Rockland Interfaith Breakfast Program were preparing bagged hot breakfast and lunches for any comer, who ordinarily could sit down in the church’s meeting room. Now, social distancing.

The giving of that moment rode on the echoes of the volunteers in my grandfather’s own World War II effort. People are good.

This time, too, will pass.

This is the mighty Native-American “Muhhekunnetuk,” Henry Hudson and Verrazzano’s waterway, the Dutch North River. It has carried people, goods and services through the ages of Indian itinerant travel, white exploration, war, peace, growth, depression and both the betterment and exploitation of “progress.” It will long continue to flow to Gotham and beyond, to Albany and the tributaries of upstate rural existence. It will not give up its life, its beauty, its remaining potential come viral illness, inept governing or greed. Muhhekunnetuk will remain, in troubling times or not,  “the river that flows two ways,” apt description from those here long before anyone else.

2020: A republic long ago formed in living democracy yet to expand to its potential must now not stumble once again nor take steps backward. Collectively, we Americans are better than what we are, and we must climb the mountain of our original promise, individually taking every comer with us.

2020: A republic long ago formed in living democracy yet to expand to its potential must now not stumble once again nor take steps backward. Collectively, we Americans are better than what we are, and we must climb the mountain of our original promise, individually taking every comer with us.

There is no reason why art in abstraction cannot co-exist with the figurative, an old barn with a window of shape, form, color, line. As in a nation, if it chooses to be celebratory of all its people. 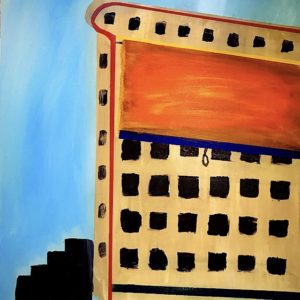 This is figurative painting meeting abstract, and isn’t that what life is as well — the real mixed with the unknown, that which is as yet undeciphered? 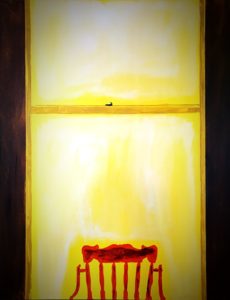 Edward Hopper, the famed American realist painter, was born in the family home at Nyack on July 22, 1882, in a second-floor bedroom that is often bathed in the special luminescence which bounces off the Hudson River and straight up Second Avenue.

Young Hopper saw this light on his first day of life, and it surely and deeply influenced the artist, who proclaimed, “… what I wanted to do was paint sunlight on the side of a house.

Today, at 82 North Broadway, at the Edward Hopper House Museum & Study Center, the artist’s high chair can be found sitting in natural and dramatic light in the upstairs hall. 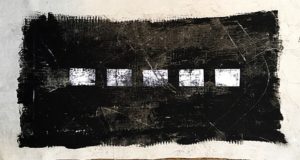 After the man left, the White House was dark, in black again as when the British set fire in 1812. But inside there was bright light, and the nation gradually returned to hope.

‘ABSTRACT AT THE OLD ASTOR’/acrylic-canvas/gunther

In the ’50s, a struggling artist stayed a night at the old Astor and left behind an abstract painting to show times were a-changin’ (just a tale, but …).