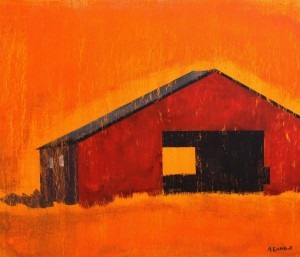 Each person’s creative process is suited to the individual. For example, if I write a column, I may have an idea on the spot or one a longtime before, squirreled away until it has stewed enough to be further seasoned, prepared, delivered, and, hopefully, digested. I never think about what’s in the pot until I add the flavors because if I write an essay in my head, say on a car ride, when I do sit down to type, the creative moment will have been lost.

It’s the same thing with a painting. When I do one, the idea is not explored ahead of time beyond the basic concept. I may think color, line, form, but I do not make the piece in my head, for, again, the creativity will have happened there and what follows will be a photocopy.

In both writing and painting, I try to tell a story or make an observation that unfolds as I write or paint. It’s like dipping into a stream of running thought, grabbing this or that word, this or that color to build the piece.

I mention the process because of what I hope I am trying to get across today. A painting I finished last week — “Barn Emerging from Oklahoma Prairie” — began on a 24×24 plywood sheet as a red field. I then had an image in mind of a working barn, perhaps for horses, similar to one behind my parents’ rented house in Tallman, N.Y., in late 1949. My brother and I would run off after supper and look at the horses, chickens and ducks, pretending that the big field next to the barn was the Wild West and that we were cowboys. Of course, that image is in our heads forever and informs our continued living, just as images do for all of us.

So, with a barn image in mind and a red field, I began to paint the piece, adding the colors I wanted straight from the tubes and mixing others until a mood developed, and a story began. With the painting left untouched for a time and then a return to it (which is unlike my writing), and that process repeated, the painting was layered with colors, or chapters as it were, and  I then used razor blades to scrape parts of the wood panel, probably to show what had been, just as we do in our lives.

Eventually, I was finished, and I realized I had painted — “written” — the story of an empty barn in the Oklahoma dust bowl of the Great Depression. I see the Okies’ anger, resentment, but I notice their pride, too,  in the land, in that fine building, in the color of the prairie.

Perhaps such a barn is still there, decades beyond the Depression, after a terrible, second war in the world, after so many other battles, recessions, job losses, national and international ups and downs and numerous presidents and other leaders.

The painting then became optimistic, for like the Okies, I think that no matter what the “depression,” be it economic or as today, a paucity of sound political thought, reverence for what has so far been achieved and greed rather than deliberate, responsible investment in all our children’s future, there will be a barn to come home too, a place for the horses again, for the goodness is in the people themselves.

May that be our nation’s destiny.

The writer is a retired newspaperman who can be reached at ahgunther@hotmail.com This essay may be reproduced.