Friendship recalled can be like the whiff of old wood that reminds you of your grandfather’s garage, or you come across a country farm stand and you remember apple-buying at the Concklin place, or you simply have a flash of memory that gives you goose bumps.

Not all friendships last long enough, so they require some connection to bring recall. Some are lost on the way — life happens — and you would rather not have the memory return to your senses. Other friendships are best left to a short time, even a day, for the gem there, soon discovered and admired, cannot be kept polished. Too good to be true.

And then there are those friendships that, once bonded, are in place for life, with frequent visits, family gathering shared, phone calls, now texts. The friend becomes a sister, a brother.

The most undefinable friendships are the ships passing in the night, affecting those who almost bond with another but do not. Hands reaching out but not touching. If you believed in reincarnation, you might say the individuals had met before, perhaps were the deepest of friends, but in this life there is no need to do that again. Or maybe a future life will have you together, and the passing-by is just a taste of things to come.

Once made, a friendship can give to each, take from each, share the other’s emotions, even the very being.

In some special friendships there is poetry, a reassuring hum, like when conversation flows easily and the silences, too, are reinforcing. Those are the friendships that cannot leave memory though there may be no contact. Even if there was hurt, which can happen in the truest of friendships because of ignorance, selfishness, immaturity, there is acknowledgement that there was a song, a reassuring rhythm in comforting routine; there was understanding that could bring goosebumps. You are forever grateful.

View Toward Gotham from the old Tappan Zee (Gunther)

The mighty Hudson River in New York, not a western route to Asia through the Northwest Passage as Hendrick Hudson hoped it would be in 1609, but to the great port of Albany, is now relatively beautiful, as the explorer found it. Once assaulted by industrial discharge, its waters are these days enjoyed by boaters and those who live in expensive housing along the shore as well as those who can get to the river’s edge and view sights from New York City to the Palisades escarpment, to Hook and Bear mountains, to West Point, enjoying many of nature’s gifts on both the eastern and western shores.

The river is crossed by several bridges, including the newly opened twin-span Mario M. Cuomo, replacing the historically named Tappan Zee, built in 1955.  Both river crossings, from South Nyack to Tarrytown, were — are — controversial, and not only because the new one is named by a sitting governor, Andrew, for his father, also a former New York chief executive.

There were two principal players in the decades-long buildup of the old Tappan Zee Bridge, which is an essential part pf the New York state Thruway, from Buffalo to the Bronx: the “progress” people, including land speculators, and, on the other side, those who sought to keep Rockland County semi-rural. The preservationists lost, and many of the old ways and more than 100 other homes and the South Nyack village downtown are long gone. But the “progress” people did not win, either, since hurried, poorly planned development has brought drainage, traffic, infrastructure and quality-of-life problems. And now there is the “graying” of Rockland, with an older population, development homes requiring renovation and perhaps not enough tax money going forward. No one knows what the future will bring, especially with the continuing decline of the middle class. Who will step up to rebuild and reinvigorate overbuilt Rockland?

Yet interstate travel, especially trucks, the real winner in the construction of the Thruway and the Tappan Zee Bridge, will continue, and even a shiny new set of crossings across the Dutch “zee” or sea will not solve Rockland’s woes nor the growing traffic concerns and the utter need to renovate the Thruway in the county. The new spans may well prove to be bridges “too far.”

The original $80 million Tappan Zee — $668 million in today’s dollars — camemto be because in the later 1940s New York Gov. Thomas Dewey proposed a super highway in the German “Autobahn” style, from Suffern/Hillburn, at the New Jersey border, to upstate New York, to foster commerce. But it soon became apparent that the Thruway bond holders could not be paid off without a big revenue source, and so the idea of extending the road to New York City via a Hudson crossing at South Nyack was quickly adopted, thus providing a nicely ringing “cash register.”

Trouble was that non-quality materials and a cheap design were used to construct the Tappan Zee. Eventual overuse put the bridge in danger of major failure, and in October 2011, at the direction of Gov. Andrew Cuomo, the Thruway Authority and the New York State Department of Transportation jointly proposed the two new spans, which eventually will include pedestrian and biking lanes and lookouts for viewers.

The “progress” legacy of the first crossing has not proven nearly as grand as first advertised, since rapid suburban growth has overtaxed local planners, zoners and the infrastructure. The new crossings will bring even more interstate travelers through geographically small Rockland, and there seems no benefit to residents. The interstate network will still have major flaws in the lower Hudson Valley region, and though a poorly planned and built 1955 crossing has been replaced by wonderfully engineered, safe structures, they will connect to overworked interstates on both sides of the Hudson.

The first Tappan Zee was built as a “cash register,” not as a well-planned conduit for progress.” It witransfer that legacy to the new spans. 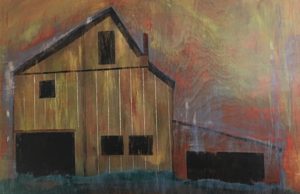 “IN THE FALL,” painting by AHG

Autumn arrives as a state of mind, prompted by the foliage change to wonderful hues, or by memories of fall’s past that tug at your senses and nudge you to “do it again.”

The light is different, incrementally as the weeks pass, but soon the imperceptibility loses its subtlety, and sitting in your living room chair or at a kitchen table, your mind wanders. You look at the incoming window light, and there it is, fall.

Somehow, that signals body change — mental surely, as you begin to think of coming winter and the fortification that will require, physically as you get ready for warmer garments carried on your frame. That is natural to all, since the cave days.

But then there is the emotional switching of gears. You have come down the pike either hellbent in a fast-paced summer or you have had the cruise control set at 20 mph for a lazy, hazy, hot season, relieved by the beach. Now you see color, beautiful color, as you near the bend, and you get a whiff of cool air, not quite winter’s breath, but enough that you know where you are headed.

The journey is made all the easier by the appearance of nature’s tapestry, a light show outside, overflowing to the innards of both your home and yourself.

Fortification, there she comes, this autumnal change, this brilliance of light in hues meant to tell you that though the heat of summer is gone and the cold of winter is approaching, fall’s color will be your cloak into the change. Nature’s mental protection, as it were.

The writer is a retired newspaperman who can be reached via ahgunther@yahoo.com This essay is adapted from an earlier work.

If I were a woman and it was Nov. 6, 2018, I would vote as if it were as important as childbirth, a fulfilling career, a great relationship or just being happy with whatever lifestyle was desirable. Those wishes aside, this is the time for women — it has arrived. We Americans require the strongest of female conviction and action — now.

Suffrage is nearing its 100-year anniversary, at least for white women. The me-too movement is outing out boors and worse. Women with articulation are winning congressional nomination primaries in Boston and New York City. There are increasing revelations in male bastions such as the Catholic Church of abuses hidden by men. And there is a man in the highest office of the land who should have been kneed decades ago.

Some faiths honor the mother of renewed humankind. Children’s books hail the mom. Women are often the remembered teachers. Who tells us how to tie our shoes? Who wipes the tears?

Then why do we — men, sometimes women — abandon their wisdom, their learned ways, their ingenuity, their gifts?

Vote Nov, 6, men and women, but especially women. Vote for candidates, hopefully many female, who will insist on ordinary decency, who will push us all to our better side.

It’s as if Mom is getting us ready for the first day of school. Clean clothes, lunch made and packed, and, most of all, the greatest, reassuring hug that carries us through the last day of school, even life. Women rock, and we all need more of their mojo now.

“Ghost lights” are the incandescents traditionally left on in darkened theaters, perhaps for safety though the superstition is more romantic, that the lit bulbs are for the ghosts  surely in every theatrical house.

There isn’t an actor worth her/his emoting who won’t admit to that. Whatever well the thespian pulls from must include those who played the part before, or something like it; who uttered the very lines and showed the very expressions that become another’s because, though we are individuals, we also are products of others. Ghost lights, behind the open curtain during performance, cast upon the stage nevertheless, you see.

So it is, too, in great buildings, like museums, like the White House where Abraham Lincoln, honest or not, has been seen by many occupants and visitors, including Winston Churchill. That the triumphs, the awful mistakes, the probable criminality, the end runs around democracy, even to save a republic, yet soaring, hopeful rhetoric and deed, too, are to be forever dismissed without karma is foolish thought. The ghosts are there, in that great house of the people, in this place where the elected leader is but temporary in a remarkable, continuing experiment.

Though the ghost light at 1600 Pennsylvania is at present long off stage, for today’s performance is seeming endless with the light from smart phone tweets at 2 a.m., it will return. The lead actor will leave. The house will go dark, the light again left on. We will all get a good night’s sleep.