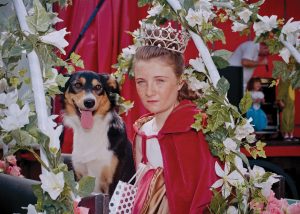 Rose Queen of Hale, Leoni Topping with consort Denby.
“She was driven through the village in an
open top classic car. Seventy children
followed behind in an open top bus and
Rosebuds travelled in a trailer.”

Americans share a “document of intent” with our British cousins. For our former royal mother country, it is the 1215 Magna Carta, which actually was reissued, modified and was more relevant to the rights of 13th century barons than those of the common man. The American version is the combined 1776 Declaration of Independence, the Bill of Rights and the Constitution, all of which are closer to protection of the ordinary citizen than the Carta but really not written for the inclusive common man and certainly not in that time for women. Yet the “intent” of each of these shared-roots documents, British and American, have come to be popularized as the mission statement for democracy. As President Franklin D. Roosevelt put it in his 1941 Inaugural Address, “The democratic aspiration is no mere recent phase in human history . . . It was written in Magna Carta.”

The translation today is that democracy derives from the people, even if in 1215 and 1776 the people were not the ordinary folk. If democracy works  — and America is still trying to get it right despite this scary presidential election — then the people rule in equality or at least move closer to that goal, “ordinary democracy.”

There is an Englishman I know who passionately believes in such democracy and who has published a book to celebrate it. It is by gifted photographer Si Barber and is titled “Queens of Lesser Realms, English Folk & Carnival Royalty.”

(“Sometimes secular, sometimes affiliated with the church or local industry, the carnival queen has been a feature of English rural life since the Medieval times, their appearance often marking the high point of summer, just before the harvest and the highlight of the agricultural year,” as the press release for the book notes.)

Si, a lensman who prefers to work in film not digital format, a challenge in itself, has proven to be an astute observer of humanity.  He has covered 12,000 miles of England to find “Queens of lesser realms by virtue of their nobility, wisdom and courage,”  and in doing so has celebrated community spirit and, so, what the common man and woman does and does so well. (Sounds like the modern interpretation of the Magna Carta.)

The author notes that the book was “curated in the 90th year of the birth of Her Majesty Elizabeth the Second. …” It is a “photographic gazetteer concerning certain notable persons of the English carnival & traditional festival, their associates & celebrant.”

Here we view many pretty women, such as the “Queen of Long Itchington, Elisha Thorne Bowmaster,” a carnival royal in 2014 with crown, the British flag and gay balloons. There is “The Coronation of Queen Aimee Bridgett of Newark,” who rides in a float. And “May Princess of Skegby, Jasmine Hannant,” representing a village where residents have organized a fair to re-ignite lost community spirit.

There is even an “Arthritis Gala Queen” (Shannon-Chelsey Kennedy), who stands proud amidst the red, white and blue. Barber, who has added witty and affectionate captions to each photograph, notes, “You can choose to blame your circumstances on fate or bad luck or bad choices. Or you can fight back.”

There are 100 well-shot, un-posed images in fine reproduction in this book, with locations such as Sutton on Sea in Lincolnshire, Northamptonshire, Kent, Essex and Greater London. The book is already in the British Library and is sure to be future reference since it documents disappearing tradition and related charity.

Barber, who hails from King’s Lynn, Norfolk, has put together images of what may be a vanishing England as “Queens of Lesser Realms” announces the “survival of local ‘royalty’ ” amid the “distractions of the iPhone.” The book is the result of a more than three-year journey across 42 English counties to find the “participants in the ancient and often overlooked rituals of English country life.”

When you look at the images of these women, children and some men in Barber’s book, you will not see the proclaimed English royalty, no more than traveling across America will you meet just the rich and powerful. The essence of a democracy is in its people, its truly ordinary folk who are actually extraordinary in their existence.

Si Barber has chosen to celebrate the real value of the Magna Carta, its evolved “intent,”  by hailing English county tradition. Long live the queens and kings of that realm!