Nyack, N.Y. — There’s a new bridge a-building across the Hudson River just 20 miles from New York City, though the original is nearing a really short but stressed 59 years. Some in these parts, a village in Rockland County, N.Y., never wanted the first crossing.
You see, growth came rapidly post-1955, so quickly that profit rather than wise planning ruled the day, then the months and years. Natural drainage areas were filled in, downtowns abandoned, endless strip shopping appeared and municipal services expanded so much that now they are cost-prohibitive, especially with no relief from the state on mandated costs such as health care and pensions.
These days the suburbs, surely this one, are graying, and seniors, so many of them, live in houses too large and few smaller properties to be had, if enough sales could be made anyway. School taxes, also with federal and state mandates, are reaching breaking point, and it is clear that income must also be a factor in the levy rather than just property wealth, often just a paper figure.
Many of our young prefer living not in suburban development with its anonymity and sameness but in walkable areas such as the once-abandoned villages. So, it’s back to the future a bit, a theme that could have been kept in place and beautifully expanded when the first post-World War II housing was constructed. Houses could have and should have risen around existing villages and hamlets, renewing the downtowns and keeping car travel down.
This time around, the new Tappan Zee Bridge will not add much to suburban development, which in this area is maxed out save for over-density building, a new worry. No, the crossing, which will continue to be fed by an under-maintained Thruway on both sides of the Hudson, will simply be a safer bridge, with walking and biking provision, but existing principally as an interstate, quite unsuitably for trucks, the freight of which would proceed more efficiently on railroads. Gotham-bound commuters and other travelers  should have that option as well. But money, big money, long ago went to the highway lobby, with drastic effect for suburban hurly-burly growth at the expense of community strengthening.
Ah, progress, which can be another way of saying, “Ouch, who pinched me and told me it was for my own good?”
As one who wished the first Tappan Zee had never been built where it was, who as native son will forever rail against bad area planning, who hopes against hope that whatever growth lies ahead will be better, I prefer to drive down Memorial Park way, in  Nyack, and stare out not at the bridge but toward a very old barge, now moored for marine life, and view even that in the abstract, as the accompanying photo shows.
Reality denial? You bet.

MANHATTAN — On a snowy Saturday that did not seem to bother hardened Gothamites and assorted visitors, a trip to the New-York Historical Society Museum & Library to see the near end of “The Armory Show at 100”  was art in itself.
The original 1913 installation at the 69th Regiment Armory on Lexington Avenue offered about 1,250 paintings, sculptures and decorative works by more than 300 European and American artists. The new exhibition, “The Armory Show at 100: Modern Art and Revolution,” features approximately 100 masterworks from the first show, which was a watershed art event, introducing work that swung to the avant-garde and which shook up American audiences, critics and the art establishment.
1913 Armory provided the path for  baby steps toward the abstractionism that would increasingly rule into the 1970s and so affect every other art form, continuing through today.
Since the Historical Society is about, well, history, the new exhibition revisits the original from an art-historical point of view, spotlighting artists, audiences, political and economic themes, music and literature.
Radical for its time, on the doorstep of the cataclysmic Great War, the unregulated greed of the 1920s and the subsequent Great Depression, 1913 Armory offered a look at the early works of such painters as Picasso, Renoir, Duchamp, Cezanne, Bellows, Henri, Hopper, Degas, Van Gogh, Seurat, Matisse, many others and that of the 1913 co-organizer Arthur B. Davies. The theme was that times were a-changin.’ The installation of living American and foreign artists, favoring works ignored or rejected by past exhibitions, however shocking in 1913,  would embolden American artists and give them voice, independence and “artistic language” of their own. The logo for the International Exhibition of Modern Art show was “The New Spirit,” and that it was.
The present armory show, which closes Feb. 23 and is a tribute to such Historical Society officials as Brian Allen, director of the Museum Division, and
Marilyn Satin Kushner, PhD, curator and head, Department of Prints, Photographs and Architectural Collections, is set in intimate rooms reminiscent of the paneled sections of the original installation. You see up close what the fuss was all about as you look at this challenging art.
When visitors left the Historical Society Saturday, they faced even more history, literally, as snow pushed against face and a carriage could be seen in the old Central Park, not unlike that of a Saturday in 1913 or long before. That there has been both continuity in human affairs, in ordinary living, in the daily goings-on of a metropolis such as New York City while culture constantly changes and evolves gives proof that you can grow, as the 1913 Armory Show implored, but also stray grounded, as Central Park and the Historical Society show us every day.

The writer is a retired newspaperman. He can be contacted at ahgunther@hotmail.com. This essay may be reproduced. 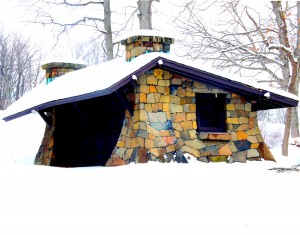 Snow — pristine, fresh, covering all the warts of ordinary land — is a childhood delight that we don’t give away to growing older, though the demands of getting to work and to the store and to the shovel and to utter humanity and the inhumanity of that, too, make us think twice.
Yet we must fight against that tide, for in the end the child grown very old, it is hoped, again becomes the child, as if by natural cleansing there is preparation for the innocence of eternity.
When a youngster finds there is no school, that a snow day has been declared, though his/her parents may fret over child care, the youngster knows that the point isn’t escaping class, for education may well be fascinating. No, this snow day is a treat, a sudden gift, a ticket to explore.
Time to build a snowman, throw snow balls, walk to the hot chocolate shop, stay in pajamas all day, hearing the furnace turn on, adding to the warmth of a blanket on the couch.
It is a moment to daydream, to use unscheduled time for whatever, even nothing, for out of nothing often comes something.
Maybe adult-dom ought to have its snow days, too, releasing the minions from the treadmill, from encapsulated thinking, from the usual choices.
Just as long as the child and the adult never share the same day “off,” for the twain should rarely meet.

The writer is a retired newspaperman who can be contacted via ahgunther@hotmail.com. This essay may be reproduced.

COLOR IN THE HILLS, a view off Bear Mountain (Arthur H. Gunther photo)

Bear Mountain, N.Y. — You would have to be close — about 48 or so miles from New York City — to hear, even in this verdant wonderland of forestation, an urban fellow say to his four year old: “They call Bear Mountain that because it is bare on top.” Well, it is bare, but that’s not the reason for the moniker. We hayseeds know that.
This beautiful part of the heavy mountain ranges off the Hudson River, so close to Gotham, is part of the New York State parks system and specifically in the Palisades Interstate Park network. Despite being underfunded for decades (in tougher times, libraries and parks always get the shaft), Bear Mt. State Park, its umbrella the Harriman State Park, and other New York parks in the Hudson Valley region are full of trails, famous stone structures crafted by Depression-era men, some pools, quite a few lakes and the historic Bear Mountain Inn, itself awaiting fuller restoration when the money is there. A hotel, cafe and trading post are now in place in the inn, as is a continuing gallery operated by Artists in the Parks, a non-profit collection of artists who share sale proceeds with the park system.
For decades, at least since the inn’s construction in 1915, we locals have driven or hiked or, once upon a time, taken the West Shore Line train to Bear Mountain on weekdays, when the city crowds were back at work. No complaint about urban folks, of course — they help keep the parks going, too, and what a weekend respite, but it’s like when company goes home. You have the house to yourself once again — it is a delight.
Bear Mountain Inn  was designed in the Adirondack Great Camps style, and it never goes out of style, literally. Even a poorly done 1970s retrofit with blonde wood, now removed, could not wither the great oaks and other dark woodwork of this monumental building.
My hope is that the Palisades Parks Conservancy, properly formed to aid “the improvement of and activities in the Palisades Interstate Park Commission, and for the purposes of promoting and expanding the preservation of natural, historical, and cultural resources in the Park for the benefit of the public”  will some day be successful in specifically restoring Bear Mountain State Park, its parking lots, its trails, its zoo, its inn, its skating rink and many other features so that the “great masses” will continue to visit, from New York City and beyond and from local communities, too. That is what was intended so long ago in the Teddy Roosevelt-style founding of the parks.

Arthur H. Gunther is a retired newspaperman. He can be reached at ahgunther@hotmail.com. This essay may be reproduced.