The “American Dream” has always been “just white,” and until the nation admits that, some of those who have arrived will keep people of color and immigrants from success. And some of those who do achieve the dream, no matter the ethnicity, the skin tone, become “just white” in their thinking, unconsciously or not. Until that, too, is recognized, strong areas of white superiority, with all the hatred, racism and fear, will rule — by whites and non-whites — on the “right side of the tracks.” Harsh truth.
Securing the American Dream in our earlier history was in part a horror story because it brought the displacement and genocide of Native Americans and was built on slavery as well, yet there is also the undeniable human advancement in this great experiment set by our founders, which has given the full world benefits as well. This movement was born out of old European religious persecution and non-responsive government. Its journey has assured progress, fulfilling manifest destiny in this land of always seeking a new frontier. Material and social growth, witnessed by the forging of the Civil War and after, the Progressive Era, the New Deal and the great rising of a middle class post-World War II, were possible because of the Dream. It gave us the can-do spirit of World War II. It brought us respect and leadership in the world.
But as with all such achievement, once inside the new house, the well-kept community, the land of good schools and no tenements, too many who get in close the door. You are the new white man, not even the white woman, and the kind from which you came have no seat at your table. Harsh truth.
We are not a “melting pot,” nor should we be. The “melting” reference is really saying, “become just white.” No, we absolutely must be diverse — it is the strength of humanity — but surely with the common purpose of equality, opportunity in a land of promise, a continuing experiment begun by the founders. Until that becomes the true American Dream, an inclusive one that also addresses horrible wrongs against Native Americans, we will have nightmares, as 2020 is showing us. This is the time to make the American Dream all the colors of the rainbow. 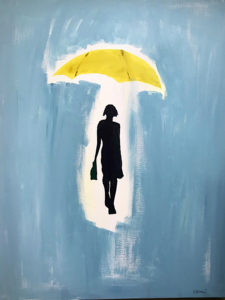 There is at least a single incomplete umbrella in anyone’s life, no pole leading to canopy, a metaphor for incompleteness, perhaps something unfinished or just plain out of sight to anyone but you.

The journey taken, the one ahead, the one under way, well that’s yours, and you alone are the master of its fate. Is rain falling on the day you are going for that job interview? Is the umbrella at hand in which to disappear as you leave a love affair?

Is there protection in politically divisive times when those in charge would deny you the citizen an umbrella?

You know how to “hold”  the umbrella, denied or not, for while its pole seems missing — incomplete — you know where it is.

Protection in life — and that’s metaphorically an umbrella — is what you make it, complete or not.

Some seasons ago, quite a few really, the no. 6 red naugahyde-covered twirling diner stool at Tiny’s Spring Valley, N.Y., place offered a fine view of the glass donut and sliced cake case, which, of course, was a most tempting time, even for a 19 year old usually seated for a grilled cheese right off the facing flat-top grill with fries cooked then and there, not an hour before and then kept under a heat lamp.

“Tiny” Lazaroff was a big man, and as they say, with a large heart to match. He was jovial, and his diner was at the comfort-level standard expected of highway stops before fast food sped up the gearing to assembly line quick-a-motion. My grandfather moseyed on west to Tiny’s for java on a Saturday morning, nursing it for a longish time with a donut “sinker” from the glass case.

What was in the case was not impressive by today’s expectations. There were no layer cakes piled high with two inches of genetically modified “whip cream” nor no “N.Y. cheese cakes” made in Sheboygan. No, just a few plain donuts, some chocolate, and wonderful slices of vanilla-iced lemon pound cake.

I usually sat on red naugahyde stool no. 3, right opposite the grill cook, but one day Tiny’s was too busy for the regulars — a tourist bus had actually stopped in little Spring Valley — and I ended up at no. 6.

Planted there, I was about to order the usual grilled cheese, but before the overly busy counter waitress got to me, the cake case’s magnetism kicked in, its fluorescent light behind the gleaming chrome and tempered sliding glass doors shining just right on a piece of that pound cake, freshly cut from a true, 16-ounce loaf, unlike today’s 12.5-ounce fakers. Like a stricken young pup in a school days’ crush, I mumbled in shyness that I just had to have that slice.

Tiny’s coffee, in a green cup on a green saucer, came along for the ride, and my time with that wonderful iced-top lemon cake was rather long and as sensuous as could be. I used a fork to parcel out 1-inch by 1-inch squares, starting at the bottom and moving ever so slowly toward the icing, which ended the night. The “kiss” as it were.

On a very hot and humid day, in the New York State that now is in summer more like Georgia, don’t avoid puddles. They instantly cool your soles and so give you reason not to give up the exercise walk that is keeping you physically fit but also sane in the restricted time of virus.

When you are young, or when some of us were, you aim for the puddles. You might also play with mud, casting little buildings not unlike Pueblo Native Americans or early settlers daubing over chinked logs to stave off a bit of the winter cold.

So, not avoiding the puddles, really or metaphorically, helps you accomplish something: as a kid, passing time, being creative, staying out of your mom’s way; as an adult, building shelter. Either way, don’t avoid the puddles.

Walkers will tell you the best time to do so is in light rain. Umbrella or not, there is an insulating quality about it, your own security blanket of falling water that enables you to amble even in a crowd, your being, your thoughts protected. The puddles you jump over are accomplishment.

It is a common photo, especially now that everyone carries a camera as smart phone, that reflections of buildings are caught in puddles, as if we can contain urban life and not be overwhelmed by its impersonal hugeness. It also makes for a pretty picture.

As it is with all simple things in a life that can be so complicated, with worries, with challenges, with ups and downs, an ordinary puddle (are there any other kind?) can be the reset button.