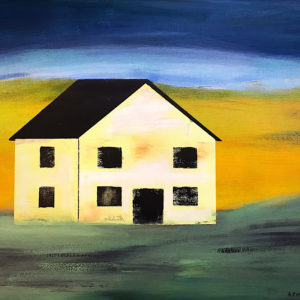 This House, isolated in American vastness, no chimney seen, no doorknob, no curtains, yet it is a sturdy home, not abandoned, people within, green, fertile fields, blue sky floating on rich, yellow, warming sun. Picture of endurance, fortitude, independence, can-do. Not urban, not suburban, not wilderness. All that exists, too, all that celebrates as well. American Promise. 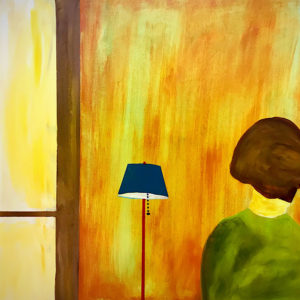 If I had a real conversation with Sara, who is in a room during this virus, as so many of us are, her face not seen though we can imagine her thoughts, it would come after our eyes met. I would wait for that, brush in hand, and then let a quiet rhythm begin in my speech but say few words.

I would want her to talk, and I would build on that, she in the painting, me beyond the frame. The conversation would be not so much what she says but what she thinks. That would make the ordinary of this unusual long moment come alive. It surely would direct the brushwork.

Has this been a time of deeper reflection? We all reflect no matter what, but usually it is on the go, the wavelength competing with other frequencies, like radio stations jumping on your favorite network.  Now there is quiet, utterly so at times, and sitting in a room as Sara is doing, the place very simple, with a strong upright standard lamp assuring light, the heartbeat can slow, and you amble rather than race through your thoughts.

More doors open into your inner mind, and you make connections to memory, to unsolved dilemma, to happy thoughts not regularly visited when we are in the hustle-bustle world.

As I paint, I know Sara will turn — just for an instant, for the piece is about every woman, and so we cannot “see” just one person.

But I will look deeply into Sara’s eyes, which means everything. And I will understand. So will she. It’s my painting, after all.

When you wrote your first letter, no matter how old you were, or sent away a quarter with three box tops to a cereal company to get a baking soda-powered plastic toy submarine that you could throw in the bath water, you took what became a familiar journey: the walk to the street corner mailbox.

My first trip to what seemed a place of magic was in the Spring Valley, N.Y., of my youth, in the 1940s. The mailboxes in those days were small and olive colored, decorative cast-iron affairs attached to sculpted concrete stanchions or to lampposts. They offered a bit of elegance to government.

My grandfather took me to the mailbox at the corner of Ternure and Summit avenues and had to lift me up so that I could open the mailbox lid, which swung on heavy bolts, and then drop the letter in. He told me to reopen it to make sure the letter had fallen in and for good luck, too. The lid came down with a clank, a solid sound, twice.

As we walked back home, I could not help wondering how my mail would arrive where I sent it, in this case, Battle Creek, Mich. Was there a huge underground pipe with air in it that sucked the mail all the way to the post office?

When the battleship arrived five or six weeks later at Box 74 in the Spring Valley Post Office, where my father got his home mail, I was amazed, and assured that government worked. I believed in the U.S. Post Office.

This mailing of the letter, the curiosity about how it got where it supposed to go and the return mail with the treasured item I requested as an eight year old was a wonderful moment of freedom, of opportunity, of growing up, of success, and it encouraged me to use the mailbox — any mailbox — on the corner again and again.

It also instilled trust in government.

Over the decades since, those small mailboxes that introduced youngsters to the mail service’s possibilities, those cast-iron portals of mystery on street corner America where moms and sweethearts posted letters to men and women at war, those durable metal boxes which seemed as strong and dependable as our nation, have disappeared, replaced with larger and many, many fewer mailboxes with rounded tops, a now patented design.

Fewer boxes has made pickup easier and cheaper for the renamed and redefined U.S. Postal Service, whose workers I hail, though leadership — driven by politics — sometimes doesn’t rate a stamp of approval (as we recently found.)

In the later 1950s, the olive mailbox look gave way to red, white and blue, a design encouraged by a citizen’s suggestion. Around 1971, that appropriate, even patriotic, look was changed, unfortunately, to the all-blue, cheaper-to-paint design that we now see.

Citing reduced letter writing, an overall decline in first-class mail, use of the Internet to write messages and pay bills and the ever-higher cost of running the Postal Service, the people in charge will further reduce the number of street mailboxes. That walk to a corner won’t happen, no satisfying stroll to say you can trust the government, beginning on a corner in your very own American community.

In my own hamlet of Blauvelt, N.Y., in Rockland County in lower New York State, there are no street-corner mailboxes where once there were four or five. You can drop mail in the one box that exists, and not on a street corner but in front of the post office. You can also leave it with the “rural free delivery” mailman, who actually serves built-up suburbia on a motor route that once would have been converted to door-to-door walking delivery given the number of people who now live here. But ever-higher costs prevented that changeover.

I applaud the mailman who usually comes despite the sleet, the snow, the rain, the hail, and it is a bargain that we can send a first-class letter for the present cost of 55 cents.

Eventually, though, the Internet, however unreliable in power outages and poor signal areas, may take over, and traditional mail service will be gone. And what will also disappear is the walk with your grandfather to mail three cereal box tops for a toy submarine. Guess Gramps can then sit next to his grandchild at the computer, though both could use the walk and the priceless opportunity to go off together on an important life journey.

The writer is a retired newspaperman. This column was adapted from an earlier essay.

The painting accompanying this essay is titled “Storm” and is a reworked piece following the tumult of 2020, now spilled into early 2021. It is, despite the movement and color, a work of hope.

The painting is based in part on “Lydia,” the 1941 Merle Oberon film that refers to an earlier French movie by director Julien Duvivier. The film is set in flashback and looks at the five men in never-married Lydia MacMillan’s life. It features a windswept house by a stormy sea where one love affair was set to sail but never anchored.

The film affected me in several ways,  particularly the emotion of the seashore house surrounded by churning waters and high winds. A port in a storm.

Then came January 6 and the invasion of the U.S. Capitol, and again we saw a storm but in the end, the lights stayed on and the historic place of democracy, last assaulted by the British in 1812, endured. Another port in a storm, however challenging the moment.

So that’s how a painting came to be. 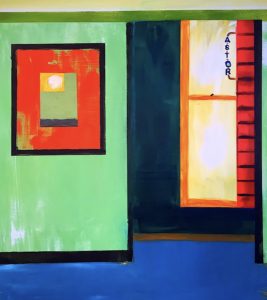 Sometime in 2021, the Astor sign will again be lit metaphorically in tourist spots across the globe; we will no longer just stare at paintings on the walls; but we will remember the quiet, the great gifting quiet of 2020 that slowed the frenetic pace and tilled fertile ground for the seeds of necessary thought. A very Happy, Healthy, Giving, Forgiving, Thankful, Reaffirming New Year to all.

The writer is a retired newspaperman. Contact ahgunther@hotmail.com or FB Messenger.