One of the non-dynamics of “progress” is that as new technology replaces the old, tried and true habits honed by trial, error, ingenuity, make-do and survival are sometimes cast aside, even lost.

For example, in this age of omnipresent air conditioning, a simple concept like hot air circulation is forgotten. A few years ago, I was in an old New York village on a very hot day attending a gathering in a late 1800s building, three stories high. No AC, and it was stifling with perhaps 100 people there. The windows were open, but they were awning types, so there was no circulation like you get with double-hung windows. Wiping away the sweat, I looked up, and near the ceiling there were other windows, all shut but with long chains dangling. It was obvious that the chains were pulls meant to open the upper windows so that the heat could escape, replaced by cooler ground-level air.

Once upon a time this building would have had a sexton whose job it was to open those upper windows, or there would have been a fellow who understood the common sense of air circulation that he simply wouldvhave pulled on those chains. An art lost, it seems, in the modern AC age.

You can extend this thinking to other things: When I was younger,  there was a neighborhood carpenter who would fix furniture so that you didn’t have to throw it out. Someone brought him a large table, probably 100 years old, most likely made from wood that was 200 years in the growing. The table had split after decades of drying, and it looked lost by today’s standards. But this crafty fellow, after scratching his head a bit, reached into his coveralls’ upper pocket, took out his folding rule, measured along the table’s 8-foot length, went over to an old woodpile, pulled out some oak scraps similar to the table’s stock, hand-cut these pieces into wedge shapes, traced them on the table, cut holes and then glued everything together with huge pipe clamps, the tools also made from scrap — old plumbing.

That table is still in my friend’s house. Today it might be on the junk pile, replaced by a new one much younger and perhaps less beautiful.

The lesson of the story is that in a faster-paced world, on the quick journey, we sometimes forget to bring along the skills that once made us survive, those efforts that also instilled pride in what we could accomplish.

The writer is a retired newspaperman. This essay is based on an earlier piece.

Relativity isn’t confined to Einstein. It applies in the art world, too. Most recent example: the Christie’s auction sale last week of “Chop Suey,” the Edward Hopper 1929 painting, which hit a record at $91,875,000. The famed American realist artist netted $1,000 or less from his agent, the Rehn Gallery. Relativity.

Most famous artists have to be gone from this void before their pieces are worth a fortune. Hopper never took in more than about $8,000 for any of his works, living well enough though frugally in his Washington Square, Manhattan, rental until his 1967 passing.

Even the locale for “Chop Suey,” an upstairs Chinese restaurant, suggests living on a budget. Such places, in Hopper’s time all over Manhattan and usually on the second floor or in the basement for cheaper rent, offered inexpensive, satisfying food, with wonderful tea in sage-green cups that had no handles.

Hopper and his wife, artist Jo Nivison, would walk to these eateries. When he returned to his Nyack, N.Y., birthplace, they went to the upstairs Chinese restaurant off North Broadway.

A look at “Chop Suey” shows two women, neither of which have smart phones, instead having what seems to be pleasant, face-to-face conversation. The meal appears over, since there is only a teapot and a bowl that may have held nuts. A man and woman are at a rear table, she smiling, he looking down. Outside is the iconic neon sign, and in one window is an abstract design, perhaps Hopper’s reference to the then current painting style.

What does “Chop Suey” say? That depends on what you see, what the artist meant or was looking for. For me, it’s relativity, the state of being relative to the period, the moment.

Edward Hopper would probably be offended by the auction price, by today’s greed art market, with investors and the one percenters largely unappreciative of what he was searching for in “Chop Suey.” His currency was his interpretation of his innermost feelings and observations. That is what we see in the Hopper works, whether they cost $1,000 or $91,875,00.

When, at the 11th hour of the 11th day of the 11th month of 1918, 100 years ago, the guns of August 1914 were finally silenced, 40 million casualties could still be heard, their plaintive cries ignored as the path to the next war was already under construction.

So, what do you say to those who sacrificed, who died in their country’s service, no matter the nation? The mechanical horrors alone of the Great War — super-big artillery, first use of tanks, mustard gas — should have been enough to thwart World War II. But no. Even the later atomic bomb and the threat of world annihilation have not ended conflict. Humankind’s thirst for power, and especially money, combined with the embers, then flames of hatred and prejudice, constantly bring us war.

So, what do you say to the soldier, sailor, marine, airman, mother, father, brother, friend of the fallen, the physically wounded, the emotionally struck of the Great War on this centennial? Wasn’t their sacrifice enough?

One of the  last soldiers, dying in the mud in the Second Battle of Guise, November 4-5, 1918, might have had hope that his son, his baby, would see a better world. His eyes closed on that hope. But the world let him down.

There will be many tributes on November 11 to mark 100 years. Big leaders will come (or not, as Trump, the American president, was a no-show at the Aisne-Marne American Cemetery and Memorial in Belleau, France, citing rain though the dead perished in slogging mud).

There will be articulate speeches, great memorial wreaths. And elsewhere some dictator will be killing the innocent; some horrible people will be practicing genocide; some war-profiteer will be getting even richer.

Yet the hope for a better world persists, as it must, if those who perished shall not have died in vain. 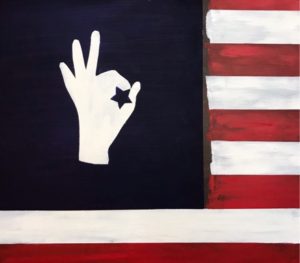 Tuesday, Nov. 6, will be the women’s election.

Females give birth to men (and women) who go on to be powerful politicians. That gender endures the pain of creation to produce us all. Given the almost karmic force of the recent focus on female abuse, disrespect and empowerment, women can turn the tide Tuesday on deliberate indecency in a nation that is collectively acting like children gone astray. Mom is needed. Women are needed.

We are all the lifelong children of our mothers, our female teachers. We all continue to learn, if we choose to do that. Now we must. Too many Americans, too many in this America, are left behind, deliberately neglected by a system that favors the rich over opportunity to enter the middle-class and remain there. No nation survives without a middle class.

Appealing to the citizenry through fear, racism, anti-immigration and discriminatory nationalism means someone will get hurt. It’s a call to be a bully, and no mother wants her child to be one.

Across the aisle, the well-meaning may offer an articulate voice against fear-mongering, against the animalism of an excited crowd but can easily patronize small-town America, the blue-collar with frayed shirts for lack of jobs. Where are the solutions?

The mid-term elections will define America. Either we try to be the decent people most moms want us to be, or we descend into Hitlerites. We are at a precipice, at a greater height than ever before, urged to jump a chasm by the unreasonably powerful. They offer no safety net, and Hell is below.

As Frank LoBuono, a fellow journalist from South Nyack, N.Y., puts it, “This is a struggle for the soul of America.”

Women give birth to our bodies. Our souls are left to us, but in that choice, remember who your Mom wants you to be.