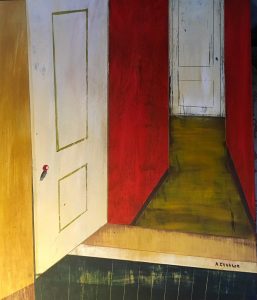 Doors can hold fascination because they are portals and keys to the ordinary things we do each day, like leaving the house or coming home and because they are metaphors for life, such as leaving a job or coming into a new situation. No matter what, if the door closes, so does something else. If it opens, so does something else.
A door can also be likened to emotion. A stuck door, one you struggle with as you open it, can trigger reflection about ongoing difficulty at work, or in a relationship. A door that always closes smoothly may be an analogy for a friend or loved one who is
dependable.
A series of doors can be a road map for a busy day, with each door closing symbolic of yet another task completed. If they all stick, maybe you should go back to bed.
Then there is the hallway, before the door, after it. Is it long? Is it bright or dark? What color is it, and does that sometimes set the day’s mood? Are there family pictures that remind you of what’s important?
How about the lock? Do you recall other doors in your youth with similar locks and how they clicked when a parent turned the
key?
Is the door knob shiny or loose or antique? How reassuring is it to grasp it, and is that a metaphor for any other anchor in your life?
Bet some of you won’t just sail through the next door you see.

Since printing began and the first sheets of paper brought information to the masses, newspapers could count on people buying enough copies to keep the profession going; to support advertisers; to hold circulation stable; most of all to protect democracy by reporting and commenting on the news. Now there are too few readers, and the republic is in jeopardy.
The Computer Age and the Internet, the smart phone, video games and the many morphings of television all snatch concentration away from people, who seem busier than ever with seemingly endless schedules. There are fewer lunches spent with a newspaper; fewer evenings after dinner in an easy chair with the editorial page and columnists; fewer open pages of The Daily This or That spread across the kitchen table.
The constantly-on computer and its search engines are the prime information sources now. In just seconds, news is read in headlines and short paragraphs, barely digested. Photographs and other images steal viewer time, reducing the brain’s word count. And “fake news” spreads like the plague it us.
Yet, the Computer Age, with its great but flawed ability to offer “facts” and commentary so quickly; to spread such information around the globe; and to keep it in reference form that eventually can expose the wrong-doers does present an opportunity to add to individual knowledge and so empower us to self-educate. And since education leads to questioning, the hope is that the Internet’s ever more vast store of words, data and images will make our younger people in particular more like the newspaper readers of other years — those who question, those who think.
What we all must do, whether we are the kind who grew up with three newspapers a day in the house seven days a week or if we are online perusers of news, is to support information delivery. Buy newspapers. Read them. Call up the Internet but truly seek information and understand it, and then question. The “who, what, when, where, why and how” must be satisfied. And if there is no “why” or “how,” if any key word in the pursuit of a free and open press is missing, we must let the media know and demand answers.
Otherwise, the free press will lose the ammunition it needs to keep us safe from individuals and groups seeking to control information for their own anti-democratic purposes. What a terrible, creeping danger that is today.

The writer is a retired newspaperman. Reach him at ahgunther@hotmail.com ahgunther@yahoo.com or 845 548 7378.

All professions have shop talk, but that rhythm is more likely to play in tune not in the daily grind but after the job, most often in retirement. Such was the conversation the other night at an arts gathering at the Edward Hopper House in Nyack, N.Y.
The birthplace of the famed American realist painter offers “First Friday” shows for member artists in conjunction with other art exhibits in Nyack each month, and I am the wine re-filler, the fellow who opens new stock and makes sure there isn’t a dry glass in the house.
That can involve enough downtime that my feet fall asleep, but also moments when I am drawn into conversation, some of it polite, some political, some “Oh, how are you? Have not seen you for awhile.” And some about the arts or the artist Hopper.
Occasionally there will be shop talk if people I knew in the newspaper profession pop in. I will sometimes meet other scribes or editors, or in the recent moment, photographers. (I was a staff lensman for more than six years and continued that role on and off for 35 more.)
Pulling the cork on a sauvignon blanc, up walked Laurie Peek, a well-entrenched social documentary photog back in the New York City of the 1970s and ’80s. Then came Colette Fournier, a retired newspaper lenswoman.
Before we knew it, and oblivious to the crowd, we were sharing stories about camera mishaps, long sessions in the old “wet” darkrooms with their chemicals and the goose-pimply feeling of seeing a print come to life in a tray of developer.
Though the wine kept getting popped, and no one was neglected, we three, like anyone who share common work habits, became deeply immersed in our common language.
How satisfying it was to realize you can rarely, but still actually, find your comrades and communicate. Reinvigorating the bond was like meeting an old friend so special that while life continues well enough without contact, reacquaintance, however short, is locking into a special frequency.

NYC — A parent has the right to “kvell,” even if you are not of the Jewish faith. I am not, but having been raised in a community of so many delightful descendants of Abraham, I picked up a few words and phrases that come in handy since they are so expressive.
I use “kvell” today because when you have a 46-year-old son who achieves a 2:41 finish in the New York City Marathon, coming in 131st of many thousands of males, you have to say something that underscores the moment.
Yet my son Arthur 4th would prefer silence since he is humble, even if his daily training — he has run almost every day since eighth grade — his persistence and his dedication make him a remarkable runner.
Arthur trains while juggling a job as a school teacher, husband, co-parent of two energetic kids, and without complaint. He loves running, just as Bob Hudson, his high school coach, instilled in him. And continues to do. (In fact, Coach drove Arthur to the city to begin the race procedure at 4:30 a.m.)
Every entrant in the marathon is a winner. Just enduring a 26.2-mile run through all the boroughs is a feat beyond the normal challenge. Yes, some are the top finishers. Some suffer more than others. But we must kvell for every one, especially in a time of deliberate national divide.
The marathon is a league of nations, a race of many peoples. Emotion expressed by participants and those cheering them on Sunday made America shine. We can all kvell for that.