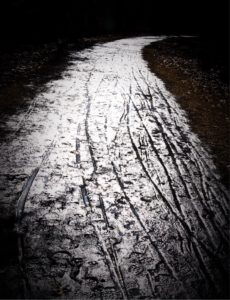 What paths we take in this life,

not knowing the why of the walk

The marks of others

are there to see, if we

a hurried pace, a leisurely one,

lessons for the observer.

The path is ours for

we are not sheep, but history

tells us to remember.

Fog — le brouillard — particularly if  it comes on the broad expanse of L’Avenue des Champs-Élysées — is not merely mist in the air from a temperature change. It envelopes, and so you can be alone with your thoughts even in the crowd. Romantics savor such an envelope.

But isn’t it the same in London, on the Waterloo Bridge, or in the East Village of New York on Bowery Street? Or in the majestic mountains anywhere in the world? Or in your backyard? Being alone so you can travel in a dream is one of fog’s blessings.

Seasons always end, leaving memories whether photographic, in the mind, in the heart, in the soul. They are there for renewal, reinforcement, reassurance.

Each of us takes from our particular seasons what we will, perhaps tucking away the particulars until a later time, maybe much later, when we look or remember, and we see what it was all about

To live is to have seasons, however crafted they may be, however stormy or calm, sweet or sour, happy or sad. To weather them, to luxuriate in them, to chill in them, to purr in them is the score in life’s music.

Defining country music is like translating the ever-growing list of languages, including colorful, highly descriptive idioms, in this immigrant America. Listening to it, from the earliest 1920s radio programs through the metamorphosis that are today’s sounds on smart phones, is to hear a sound train’s lonesome wail and mighty rush on some of the tracks of our always-developing, changing history.

If ever a national candidate sought to win the hearts and minds of a full America, he/she would do well to listen to country music over the ages and then talk to those who have lived it, are living it, those whose hardscrabble lives have endured. It would do everything to dispel myths and prejudice in a land that sorely needs love.