No Memorial Day, USA or elsewhere, is without heartfelt words and tribute, parades, wreaths, re-mourning. What is always missing, though, are the voices of the fallen. Would that we could hear them. What would they say?

“Mom, I was as scared as you, but I could not show that with you there. So I never really said ‘goodbye’. …”

“Dad, you told me about your ‘war stories,’ and I figured we’d swap them when I came back. …”

“Mary (any sweetheart’s name), I was crying inside when you were showing tears, and we both felt that we had been pulled from our door to the future so that I could enter another, for a time only, but. …”

“Mr. Singer (any teacher’s name), I know you expected me to be the same distracted fellow day-dreaming in the back row, but I was really awake that final day, and I remembered you telling me to pay attention. It helped my pals in the squad, the ones who say urvived. …”

“Mayor Jones (any public official), I know there are speeches every Memorial Day, and parades and gun salutes and tears and then the barbecues, fireworks, leisure. Understand that all this is fine with me. I’d be there, too, if I could. But also believe that the man who fell next to me, the ‘enemy,’ isn’t one for me any longer, and he has mourners, too. …”

“I read the ‘Red Badge of Courage’ in Miss Rouy’s literature course and could not understand then the fine line between courage, the chance of it, the millisecond for choice, and the instant when cowardice could win. I thought it was black and white but now understand it is not really so, that military training and society’s expectation may of necessity set it up as clear choice, but in the moment of decision, there is fear, opportunity and the possibility of both heroism and cowardice. There is much more humanity to it. …”

And it is for humanity that I am ‘gone,’ the hope of it anyway. I am not truly ‘gone,’ of course, since I have not died in vain. The sacrifices of any of us, dead or living, is for betterment, for that continual ‘thirst’ for the world’s life and its great possibilities. Otherwise, why did you all lose me? …”

The writer is a retired newspaperman. He can be reached at ahgunther@hotmail.com This essay may be reproduced. 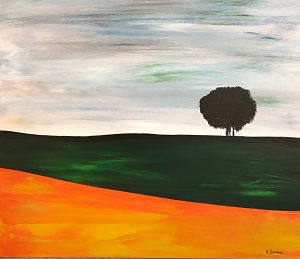 “On a Hill,” acrylic on wood

Every child, kid, needs a place to get lost. You can’t always be with parents or siblings or even friends. There has to be your own spot, be it imaginary, through reading or day-dreaming, or actual.
I day-dreamed enough to be spotted by more than one teacher and surely would have absorbed more in class if my mind did not wander. But if thoughts didn’t take the road less traveled, I would not be writing this or any other piece that ended up paying the bills and fulfilling me.
In my youth, there was also a real spot where I could get lost and be with myself, actually several. The key place was a large tree in an apple orchard near my second-grade home in Tallman, N.Y.
Very rural this hamlet was, with light traffic, a number of farms and many areas in which to play when your mother expects you to leave the house on a Saturday morning so she could clean.
The big tree in the orchard was high on a hill, and it was majestic, so tall. Though surrounded by apple trees, they were not competition. The big tree seemed their elder, even if not of the same species. It commanded respect.
For me, the large tree was a friend. I trusted that it would always be there, be majestic, be available to lean against while I day-dreamed.
It was where I could get lost.

The writer is a retired newspaperman. Ahgunther@yahoo.com 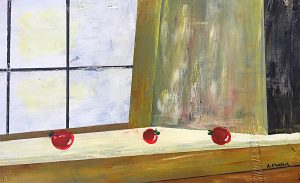 In the Rockland County, N.Y. of my late 1940s into 1950s youth, taking the same, long bicycle ride twice but a month apart often meant witnessing a disappearing landscape. This was post-World War II suburbia, and rural land so close to New York City was honey to speculators and builders.
Hurly-burly construction in a vacuum of sound planning brought too much growth too quickly, eventually nailing the boards on true downtown village shops in favor of endless highway strips, but that’s not the point of this essay. Rather, it’s all about apples. Peaches too. A few pears. Orchards lost to Huggy Bear Estates and similar housing development.
Those old bike trips, and many walks, too, would take me past the generations-old orchards of the Concklin, Davies, Brown and so many other families. No spring was without early fruit tree buds, virginal white, pink, too. It was a sight to behold but music, too, as the birds returned. Their notes were so hopeful as the whistling winds of winter morphed into the stillness of anticipation toward eventual harvest.
When the bees came to pollinate, nature and its cycles were really ready to perform.
In my prejudiced opinion, Rockland apples were the best tasting, and the varieties still grown by the two or so farms left make your mouth water long before you chomp on them.
As with many moments, a very simple experience like passing a blossoming fruit orchard can reset tempo, restore balance. I have walked in the canopy of nature in the confusion of the early teen years. When love was lost. When I had career concerns, family worries. Each time, the renewal that is the rebirth of an orchard served as a free counseling session, within, yes, alone, yes, but nevertheless introspective and with questions answered.
Nice place to grow up — where an orchard blooms.

My grandmother was used to seeing road-worn men in old but once-pressed suit jackets at her back porch in Spring Valley, N.Y. They were there during the 1930s Great Depression, hobos off the Erie line looking for a bit of work and the sandwich to follow.
Nana never had a job for them — my father and grandfather took care of 14 Ternure Ave., but she never turned away eyes in hunger. She had little enough food though my grandfather managed to keep his job as foreman for Briarcraft, a smoking pipe factory.
Some of the men would tell my grandmother about themselves, though most were shy and reticent, and as she said, well-mannered, perhaps recalling their own mothers or wives left behind. These men were not shiftless, but down-on-their-luck fellows who lost jobs, some good ones, in that catayclismic time when unemployment in 1933 meant 11 million jobless, almost 25 percent. Businessmen, farmers, even ex-industrialists road the freight rails, alone or in the comradeship that always gathers in calamity.
The Erie had a freight yard in Spring Valley where coal, lumber and feed were unloaded for the area. The hobos got off there, with some spending nights in the woods off Lawrence Street just as the homeless do today.
So many decades later, a few streets closer to the Erie rails, now the MTA Pascack Valley Line, a non-government program offers sandwiches to go, too, after a sit-down breakfast. Lots of volunteer grandmas there, a few grandpas, and no one asks questions. But they do listen to humanity, just as Nana did.