If the world were a tree, and we brought forth water and pruning and, most of all appreciation no matter the shape, the variety, the location, the age, there would be enough shade for everyone, enough fruit, enough beauty.

And if the paragraph just written were a metaphor, it would be a description of the life service of a more than decent human who just passed. Chris Murray was a nurturer, and his trees were the homeless, the afflicted, the poor and hungry, the abandoned in a world with individuals too involved with this and that to notice.

In my time, I knew Chris as the social worker active in the Rockland Interfaith Breakfast Program out of Spring Valley, N.Y., and with the Helping Hands organization assisting the homeless. A “Longgg-Gilander,” as he often and proudly referred to himself, Chris was both a liberal’s dream and a Conservative’s wish.

He felt the pain and saw into the dark tunnels of the drug-afflicted, of those officially forgotten veterans whose long nights forever echo with gunfire and bloody screams, the depressed, the mentally ill, those unable to cope.

Chris Murray also deeply understood that you cannot just offer tears but also the tougher love of giving to some who cannot or will not be thankful. In this mix of compassion and call for responsibility, he was both liberal and conservative.

That is a lesson for the rest of us, particularly in what may become a new political world in the United States.

Chris Murray died. But his look-you-in-the-eye compassion is re-born in his memory.

Each winter holiday season, this space is reserved for my son Arthur, a teacher and writer who has been offering stories for two decades.

The couple had taken to nightly drives right after the clocks had fallen back in October.  Spring and summer had been filled with early evening walks to escape the house but the early darkness had put an end to that.  At first, they drove simple loops throughout their town and the neighboring villages, sometimes talking, sometimes listening to music on the radio.   Never the news.  As the temperature dropped and the darkness deepened, they fought back by heading out on longer routes through unfamiliar towns.  They had fallen into a pattern of taking turns choosing an album to soundtrack the trip.  They had an eclectic collection to choose from and this lent a bit of surprise to the drive.  Mostly they chose albums long neglected.  Songs they hadn’t heard in too long a time. In a way it was like when they were younger, when it was a nightly ritual to fall asleep as a cd played.

The stretch of the last nine months had given everything pause.  Even the things never taken for granted weren’t spared.  The year laughed in the face of tradition.  In some ways, this was fine.  If all you had lost was tradition you should probably count yourself lucky.  Maybe alongside all the suffering was a lesson on the what to truly hold on to.  There was hope around the corner.  As the year drew to a close, ignorance was on the run once again.  The resilience of science and optimism had temporarily laid low those given to wielding fear as a weapon, as a barrier to evolution of thought.

This was heartening.  Sometimes this is where the conversation went.  Other times things grew quiet.  The couple knew each other well enough to revel in the warmth of the silences, the only sound the cd their partner had chosen filling the spaces.  It was then that his thoughts wandered the most.  He thought about the years past and the illusion of time.  How something sixty years before could be vivid in his mind while last week was nothing more than a blur.  He thought of how, in a way, he depended on the rhythms of the year.  Rhythms that had largely been shattered recently.  This was how he appreciated the smallest changes.  This allowed him to hone in and focus on what was precious and new when everything moved too fast.  Like changing one photo in a frame on a wall filled with many, his mind could now absorb the beauty of what was new.  A shooting star in an otherwise static night sky. This was how he appreciated.  This was how he remembered.

His wife was different.  She never had had the need for repetition.  Her mind worked in different ways, never dependent on rhythms to sustain her.  She reveled in the novel.

There was, however, a yearly practice that filled the space in the middle ground between the couple’s two philosophies.  Each year since their children were young, they had gone to see the Nutcracker in December.  At first, they would save up and head to New York City and Lincoln Center, but somewhere along the way this changed.  They started to seek out other performances of the ballet to attend.  It was amazing how many different groups performing different versions could be found within a day or two’s driving distance of their home.  Jazz variations, hip hop, guitar trio, all drums, high school, college.  Once they even found the Nutcracker performed by the characters from Peanuts.  It became a fun challenge to find a new way to do something they did every year.  They never ran out of choices.

Until this year.  He knew, in the grade scheme of things it was no big deal.  This was not life or death.  It just made him a bit sad.  Especially so for his wife who loved this unusual tradition.  He had accepted that this would just be another change in a year filled with many.

The first night of winter it had fallen dark by 4:30 so the couple set out early on their drive.  It had snowed several days before and stayed cold.  Ice sparkled beneath the holiday lights as the car glided up the road.  They drove north and then circled back over the mountain and down toward the river.  He decided to head back along the mountain road that bordered the park, a park finally appreciated this year after a generation of visits solely from neighbors.  Looking to the right past the large wooden sign, he noticed the gate, normally locked at dusk, was open.  The road was even plowed, a practice that in previous years had fallen by the wayside.  Maybe the park now had night hours to give people more of a chance to get out.  He quickly turned into the park road to see.  There were several cars parked in the lot and a few people walking up the path to the old cinder track and stone amphitheater.

Guiding the car into a parking space, the man and his wife buttoned up their coats and got out to see that the track was lit up.  Not a normal occurrence for this time of day and season.  Walking up the hill, they began to hear music playing and occasional clapping.  The lack of voices seemed odd.

Clearing the rise of the hill the scene was revealed before them.  On the grass field, still covered with snow, about twenty people of various ages were spread out, dressed in brightly colored winter clothes.  An evergreen tree that bordered the stone seating had been decorated with lights and ornaments.  The performers, because that is what they appeared to be, moved with varying degrees of grace around the field.  It couldn’t quite be called dancing, but it wasn’t quite walking either.

It was then that the man heard the music.  Out of a speaker that had been set up on one of the stone steps came a sound that he had heard during many Decembers previous.  A sound both familiar and new at the same time.  It was the Nutcracker, the scene where Clara is whisked off to the Land of Snow.  The couple stood frozen, watching as the performers moved, danced, and walked to the rhythm of imaginary falling snowflakes.  The scene ended, there was a pause, and then, rather than moving on to the next scene, the Land of Snow started up again.

The couple stood transfixed at what played out before them.  They must have seen the Land of Snow performed three or four times before the performers stopped, took a bow, and left the snowy stage.  It didn’t appear that the group planned on performing any other scenes.  Grabbing each other’s mittened hand, the couple began to navigate the icy path back to the car.  They didn’t talk.  They didn’t need to.

The other day, in the middle of this awful virus time, I got a call from a friend who needed help replacing an electrical switch, something not beyond me.

“OK, I replied, what’s wrong?” The fellow answered, “It’s a three-way switch, and I cannot figure out how to wire it.” “Be right over” was my answer as I suited up with mask and hand cleaner, gathered tools and cast off.

When I got to the man’s house, he had already pulled out wires from a location upstairs, never a good thing because you invite a mystery: what wire goes where?

We checked that the power was still off, I looked at his replacement switch and found the right wires. Flipped on the circuit breaker but no overhead vestibule light. I asked the friend why he thought the original switch was broken, and he said that it seemed wobbly and that the light was out.

Not to make this story complicated, but I told him that 3-way switches, despite the name, control a light from two locations, and that he might have guessed wrong — that the other switch was the malfunctioning one, and besides, you should replace both devices at the same time.

So, I got another switch and put it in. Still no illumination. Ah, that is when the lightbulb went off in my head. “Did you check the bulb to see if it was OK,” I asked? One new energy-efficient 75-watt equivalent later, let there be light reigned.

There were two dense people here — myself and my friend, both of whom did not look for the obvious. It was like changing the fuel pump in your car because you ran out of gas.

Back in the day, in my hometown village of Spring Valley, N.Y., there was an astute, community-friendly, well-known radio/TV expert repairman who often received calls that someone’s radio or TV was completely dead.

Taking one such call as he leaned on his own Philco radio set in the living room, one leg crossed over the other, John Romaine would calmly tell the anxious caller, who did not want to miss a favorite program, that he would be right over.

More than once, he found that the power cord had been pulled out when someone plugged a vacuum cleaner in, etc.

The fellow never charged for his visit. 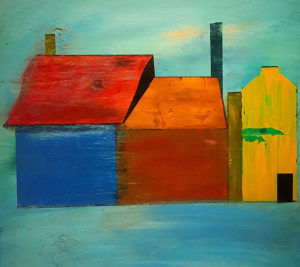 Just a few words here. After posting a recent painting without text except for the title “HISTORY,” on various internet sites, I was asked to provide a narrative.

Truth is, we write our own when we look at art work — paintings, drawings, sculpture, collages, etc. Even artists cannot always tell you what their work “means.” And any particular piece is reinterpreted over time, if it’s ever seen again.

On reflection, though, I humbly think the painting pictured above represents America, its history of barns, grain elevators, industrial chimneys, homes. No windows, so as not to be specific as to region, ownership, period. We all own the structures, our history. Maybe it’s all of us trying to find America after what few can deny has been tumult.

Or, perhaps it’s just a bunch of buildings. Maybe just a gathering of colors.

You can decide, or not. Thank you.