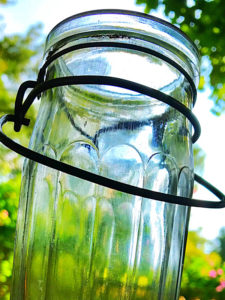 When in the time of virus you are so bored that you run from the house screaming “I can’t take it any more,” how do you return to normal blood pressure?

For me last week it was walking about the upper back yard surveying trees and rocks and some grass and more weeds that I usually do not look at. I can see the space just find from the lower lawn or a screened-in porch, so the upper yard is mostly a nice backdrop for the usual passing of time and day-dreaming.

Walking about the place in Blauvelt, N.Y., a few days ago, I noticed something shiny, trapped by a tree root. Since my back yard was once part of a 1920s home, it is not unusual to find buried things that pop up as trees grow and the land evolves,  In the 1920s-’30s, homeowners did not always have trash pickup. They would burn paper, compost the scraps and bury tin cans and glass jars, though they might reuse the glass. My upper yard includes these items plus lots of coal cinders from the hand-stoked furnace days.

When I saw the shiny bit, I figured it was glass, which I have occasionally dug up. I first used a small knife to carefully make my archaeological dig, then a shovel. I thought I would eventually pick out broken glass but, lo and behold, what I dislodged was a 1930s jelly glass, the kind that was meant for reuse as a drinking vessel during the Great Depression.

Took a while to clean it up — nature had filled it with dirt, but it came out nice. Added the discarded wiring from a 1940s Mason jar.

All in all, great respite in the time of virus.

There seems a steady rhythm these days living amongst the restrictions of the time of virus, whether it be the gift of simplicity in just not doing much at home, sitting in a chair thinking or reading, perhaps tea at some hour, a cookie or fruit with that; this routine repeated daily — a steady rhythm. It can keep you sane.

In the breakfast program where I cook in the great quiet of a large 1865 building these virus days, having a bit of guilt but not much about being alone, for there surely is music in solitude, I have found a steady rhythm, too, in making grilled cheese.

I am at about the 1,000 mark on these sandwiches, part of a breakfast kept warm for those who come after I am gone. The right hand that does the flipping has its own rhythm, as expected but different for the individual, my own modified because of some arthritis.

But it is in the making of these sandwiches — the arranging of many slices of bread on a big surface, the pulling of sliced cheese from commercial bricks, that there is real rhythm — piecework as it were.

There is great order in that — lay out the bread, peel off the cheese slices, put a top on the sandwich. Odd, but accomplishment, so very ordinary, absolutely nothing difficult but there it is.

And for this writer, as always in the village of my youth, my father’s, back to my grandparents, a connection. Moons ago, my mother — now I know she was a sainted one though she chased me with a broom — was on piecework herself as a small-parts assembler at the Briarcraft Smoking Pipe factory where my grandfather was foreman. She was paid by the piece, so she didn’t tarry, though she had to be careful to avoid rejects.

Today, just streets away from what was Briarcraft, I, too, am paid by the piece, each grilled cheese sandwich going into a hungry stomach. Hope I do not offer many rejects.

This is the first installment of a fictional piece that I hope offers real-life metaphors for all. The story may be continued. …

It was a bit of an amble on the N15 that Dermont Bonner took to Killygordon from Strabane, but this gave the seanchaí time to perfect the next story, to pad it out. Dermot could stretch words as well as gab, and in Donegal he would have to fit the tale to the Ulster Irish.

(The story teller, the seanchaí, was the people’s entertainment for centuries, especially in the very rural Irish areas without books and literacy. He was the keeper of legend, folklore and myth, the custodian of tradition, the man before there was the wireless voice and the telly talking-image. To this day there is reverence and thirst for the seanchaí — anyone who keeps the child in him has an ear cocked for the tale.)

You can be sure Dermot had his grasp on the spoken word, and that day on the N15 he was headed to the local for some trade. The seanchaí had been in County Tipperary last, at a teach tábhairne

with a sign above that identified it as Lyon’s Pub. It doubled as a hardware store and undertaker’s, so there was much to add to the regular story just by knowing the bio, if the planned tale was not already raising the eyebrows or the hairs on the skin or pulling the tears.

This heritage pub offered the tourist atmosphere, what with its wood paneling and worn brass bar taps, but it was the regulars, the neighborhood, that owned the place. They tarried every day and evening, absorbing the fragrant deepness in its walls of not only a million pints of Guinness but the wakes of many a passing, the taps at Lyons pouring from one generation to another.

At the teach tábhairne Dermot kept them hanging on his words by telling the story of Molly McGuire, who had given Kevin Shaughnessy the boot after eight months. He was climbing to Heaven then but soon would be down in purgatory at least. Kevin was intending to walk the marriage path, finally to give up the freedom and opportunity of bachelorhood, something he thought near-impossible. There had been much gaiety in that carefree life, but Molly had eyes leading to soul, and once he took the deep look, he was changed. Alas, she ended the thought, no praise be, with a gentle but firm get lost.

This was ordinary, of course, two people not to continue on the same road at the diverge. But Kevin was smitten, had gone past reasoning, and the abruptness of Molly’s answer saw him confined to a long but solitary life on a small farm in Portrane, pigs and all. It was better than ending it at the Cliffs of Moher, though some days Kevin was not sure. Molly? She married Sean, the Market Street butcher, had the five kids, was a good wife and all. But her Sean never saw beyond the great greenish-blue color of her eyes, as Kevin did. It was a life.

In the booth near the road window at Lyons, Mary Ahern rubbed her cheek of a few tears, recalling her own journey with a Kevin but also tilting her head toward the shoulder of Martin, her Sean. A life.

It was a popular tale that the seanchaí told, adding local color. It was not always to the pig farm at Portrane that Kevin exiled himself. He could instead be a hermit on the Enchanted Islands off Donegal.

But Dermot would not tell the Molly-Kevin story in the far North. No, he had been up there many a time, and it was different than Dublin, or Cork, Limerick or Belfast.

Dún na nGall, “fort of the foreigners,” is a land of where it’s different. Everything. Bordered by the Republic’s County Leitrim and Counties Londonderry, Tyrone and Fermanagh of Northern Ireland, there is distinct cultural identity. There are also long, gloriously sunny beaches and majestic mountain peaks of great beauty, trade off for some brutal weather and desolation, a place of extremes.

And why wouldn’t it be, so far north that a quick jaunt might land you in the Atlantic Ocean headed for Iceland if you kept to port 15 degrees. It is this sense of place, perhaps, that keeps a Donegal person on top of things.

(to be continued, perhaps)

Back when, and “when” is whenever you or I hold a memory about a place or someone or thing, there was a country road in Pomona, N.Y.,  named McNamara, and though the signs still proclaim it, no longer is this a rural place.

Nor is Pomona, named by apple farmer Nicholas Concklin in the 1700s, still wearing the robes of the goddess of fruit, for most of the trees are now 2x4s in suburban development.

There was a ritual in youth back “when”  included a summer walk from Hillcrest, a nearby Rockland County  hamlet, to McNamara, early on before the day’s heat and humidity. It began off Eckerson Road onto State Street, to Hillcrest Avenue, across Rt .45 to Locust (sometimes it was the parallel Faist Drive) to Hempstead Road to Brick Church Road to Union to McNamara, where the hills and valleys, however light, caused young legs to stretch and the heart rate to quicken.

It was all worth it, for along McNamara, just before the old ASPCA  animal center, were wildflowers and hay-like straw, which in the increasing warmth and bathed overnight in the wet, gave off a fragrance that Nick Concklin himself enjoyed so long ago.

For youth a bit bored by even summer recess, a walk to McNamara with or without pals brought accomplishment as well as passing the time of day. It was also ritual, and we all want that because regularity means some things in life can be put the shelf where they ought to be, and we can count on having them there and taking them down when we need to do that.

Back when McNamara still looked like it had for more than 100 years, a simple walk brought a trip to a friendly place, made that way by familiarity. Its many changes now in suburban growth and the equally major modifications and morphing in a youth’s growth to adulthood and its own journey toward sunset mean McNamara Road, now mostly in the Village of Hempstead, can only be a memory. But close the eyes, and a whiff of those wildflowers easily returns.

The writer is a retired newspaperman who can be reached at ahgunther@yahoo.com