Rituals in our lives change, but that does not mean they are easy to get used to. They are even tougher to accept. Here I was in another town, USA, the location no less important than any, communities where life begins, passes, ebbs and flows in between. I was expecting 1980 or thereabout to remain the ruling time, but it was 2020, and I just did not get it.

An early-morning ritual is to take a walk, have java and read the local newspaper. And so I sought a paper. But there was none at 6:30 a.m., long after morning editions have gone to bed, to press.

I asked a very polite but matter-of-fact store clerk when the newspapers might arrive, and I was told,  “When the man gets here, he gets here.” In other words, the news, the information that impacts our lives, which entertains, saddens, enlightens, exposes charlatans and connects us to the full range of human emotions, and which once would await no man’s delay under deadline tradition, would now “get here when it got here.”

I was an active newspaperman for four decades and remain one in soul. Never missed a deadline, thank you.  No bragging – the first rule of newspapering is to get the info out on time, quicker than that, if possible. We all did it, do it.

Now, many deadline clocks no longer tick louder and louder at the pressman’s hour. They are still. The daily printed word, the “who, what, where, when, how, why” of public meetings, government contracts, local sports, national and world news, and, yes, oh yes, presidential elections does not make deadline. Newspapers fold and fold, victim of the long trend of fewer print readers, consequently reduced advertising revenue and information delivered in bites rather than full length via Smart phones and iPads, blogs, Twitter, Facebook and TV/radio.

Sad, for a much fuller report can be had in print, all the better to be informed in a democracy that you want to keep. If a foreign power sought to dumb down a nation and have its people thrive on falsehoods, misinformation and gossip; if it wanted to turn elections toward zealots who build and keep a base by fear, then it would back hedge funds and other “investors” that buy declining newspapers and close them down for asset profits. You see, democracy dies in darkness, and that is the aim of some foreign powers. It is also the goal of some within these United States.

While I waited in a strip mall parking lot for the paper delivery guy to get there, I saw descendants of folks like me, but they were not buying papers as their dads and granddads did or still do. Instead, they were in their cars, lined up at a bank, at ATM machines, to get money for the day.

Once, we carried cash in our pockets from our pay checks for a week or two. And we used some of our pocket change to buy a newspaper.

I doubt if many of the good, hardworking people on the ATM line buy a paper after they get their bank machine cash. Probably quench their thirst for information — and that remains a human constant — via mobile devices or computers. What they might swallow may be deliberately slanted “news” that does not go through traditional editing and vetting.

The world has changed, and so has its ways. I simply forgot to get on the train. But I’ll never read about it in a newspaper. 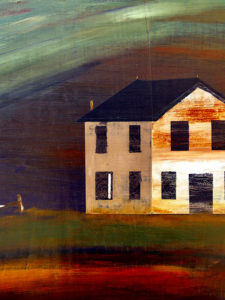 This painting of mine is rural America, where predictability, reliability, routine are the melody for living.

Conservatism, fear of government overreach service, Pony Express on, a life-stream of letters, parcels, farm equipment parts, seed, baby chicks, then medicine and whatever few checks might come in retirement.

From this house, still catching the light of awesome land, a family, then a man and wife, then perhaps just the woman, would go to the general store to mail something but also to gather a bit with far-flung neighbors in the decency of shared existence.

Now, so far away in Lobbyville, D.C., in the special-interest section at what was once the People’s House, a wink comes to make metal boxes in blue disappear from the country store, from city and suburban corners, too.

Decency no longer has first-class postage.

A peach in season is like long-sought love that suddenly makes connection.  The heavens appear, but as in many a novel and short story, consumption does you in, spoils you for the ordinary. You can love no more past this time.

Until the next season.

It isn’t Adam and Eve here, forbidden taste of the fruit that brings guilt and addiction. The peach in season, freshly picked at maturity, never ripened as a green orb by gas in a truck or rail car from this place or that, is like the magical confluence of things out of this world when the tingle, heart patter and goose pimples of human bonding strike as lightning.

You are hooked for the moment. You do not question why this peach is so full of nature’s best taste, why the skin has a snap never arrived in the ordinary supermarket variety, picked weeks ago. You simply savor rich sweetness that almost makes you cry, humbles you so in the process that you thank your god or your lucky stars. You are filled with satisfaction, and that keeps the tank supplying until the next year.

Once, in this region called Rockland, the smallest New York county geographically outside Gotham’s five boroughs, tree-ripened peaches were the norm. But post-World War II development took most farms and some of the greatest fruit ever grown, given our particular climate and glacially derived rocky soil. Now, there are but a few farms, like the Concklins, the Davies family, the Van Houtens and others in the Rockland Farm Alliance, such as Bluefield, Duryea, Pfeiffer Center, Stony Point Center. In their place is what is an insult: stores in all too many highway strips on old farm land that, with some exception, sell peaches from states far away, perhaps wonderfully tasting in their own element, had they ripened there, but not in Rockland as gassed creatures that are so grainy inside that you must throw them away, even after you have paid dearly a pound in “season.” You had hoped, but. …

No, I await the homegrown, larger fruit that like the lover you recognize in the dark, has its own scent. For a few weeks there is this affair that has you coming back and back for more, even moving you to tears, for no man-made sweetness is comparable to a fresh peach, the skin of which produces a snap at first bite that is exquisite foreplay.

Once your time is finished, you will have to move on, for the fresh peaches are no more. But that is just fine, thank you. As with the deepest of love affairs, the sort that can be revisited in its season but never sustained in ordinary time, day after day, week after week, you are satisfied so deeply that routine will never do.

You await the next rendezvous. It is worth suspended time.

The writer is a retired newspaperman. This essay is derived from an earlier treatment. ahgunther@yahoo.com

ANGELS IN THE ROOM

“Religion” is no longer organized or traditional for this writer though I have respect for all beliefs and for the utter great goodness of those humanitarians found within them who as reward regularly suffer the slings and arrows and condemnation of some institutional leaders and policies. An old story, lived vividly by the Christ of the Christians.
But this is not an essay on religion. It is about angels in the room whether you believe in them or not. Call the spirits what you will if you do not cotton to any god or hereafter. Yet I challenge you to say you have not met an angel in the room, your room.
A few years ago, off the Kings Highway on Cape Cod, not far from Welfleet, my family and I were gathered at a rented home the driveway of which was deeply rutted, not paved, just like the old orchard paths I walked along as a child in Rockland County, N.Y. On the Cape, on that driveway, I quite suddenly found an absolute calm, a warming feeling much like a comfortable blanket. Others were talking, but all I heard were the chirping birds you notice in your youth on a spring day, and a quieting — and you can hear the quiet — of my soul. I was both in the mortal world of a vacation landscape but also traveling with the angels. For just a very short time, all was right. I was cozy, without fear of any sort.
On only a few occasions in a lengthened life have I noticed the angels. Once on an evening walk on South Mountain Road in my county, again in quiet, another time heading to kindergarten and climbing a small hill to get there. A strong, rising sun, more quiet and those birds. Just 5, I felt life would be OK. Only angels tell you that at such an age.
Who knows what trials any life will bring? What happiness? What is just plain ordinary?
Just expect that out of the blue, faith and prayers or not, a very rare visit of utter calm and affirmation of hope will arrive. Perhaps that is all that is needed to endure. Angels in the room. 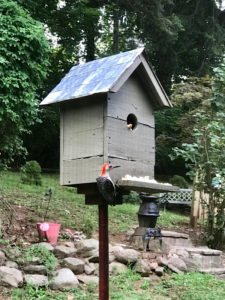 Ordinarily, birds would not attract notice in the backyard. Laissez-faire: they go about their life, and I do the same. Do like their singing, chirping, fact that they are there, which probably means no horror story like a hurricane is coming or a win by the indecent in Election 2020.

So, birds are quite welcome, as I hope I am to the creatures, for I both respect and feed them. But now, rather than a fact of living for this human, birds have become morning companions.

In the time of virus, with so much stay at home, the rituals, the habits, the ordinary doings have changed. No longer rushing out the door to buy the papers, grab the coffee, park the car and read in that great quiet we must all have if only for a moment, the scene has changed to reading a delivered newspaper, making what may or may not be coffee at home, sitting on the back porch and having the birds drop in to eat their morning bread at the feeder/birdhouse.

Never knew there were so many bluebirds, and that they are hogs, repeatedly swooping in to grab. There are sparrows, too, and a few colorful birds with red heads or scarlet coloring.

They know when you are heading out to feed them, with the word passed along in rising chatter, the bird world’s telegraph.

All in all, delightful morning guests. Or perhaps I am the visitor.